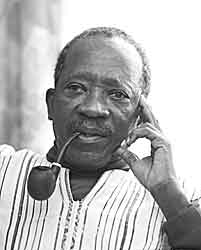 Provided by Wikipedia
Ousmane Sembène (; 1 January 1923 or 8 January 1923 – 9 June 2007), often credited in the French style as ''Sembène Ousmane'' in articles and reference works, was a Senegalese film director, producer and writer. The ''Los Angeles Times'' considered him one of the greatest authors of Africa and he has often been called the "father of African film". Descended from a Serer family through his mother from the line of Matar Sène, Ousmane Sembène was particularly drawn to Serer religious festivals especially the ''Tuur festival''.
Loading...