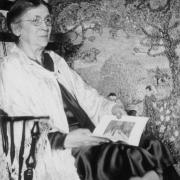 Provided by Wikipedia
Jessie Catherine Kinsley (March 26, 1858 – February 10, 1938) was an American folk artist known for braidings - an artistic medium of her own devising which grew out of her interest in colonial-style braided rugs.

Kinsley began making braidings at the age of 50, and created many pieces for friends and family. One author described her as having "typified the domestic artist”. Kinsley’s works attracted attention, particularly in the Arts and Crafts world. In 1917-18 alone, her creations were displayed prominently in the annual exhibit of the National Society of Craftsmen (New York), the Craftsmen’s Exhibition of the Carnegie Institute (Pittsburgh), and the Applied Arts Exhibition of the Art Institute of Chicago.

Kinsley was also a prolific diarist and correspondent. A selection of those writings and a memoir were collected into a book titled ''A Lasting Spring: Jessie Catherine Kinsley, Daughter of the Oneida Community,'' which was edited by her granddaughter Jane Kinsley Rich and historian Nelson Blake. ''A Lasting Spring'' details Kinsley's experiences growing up in a utopian community and her subsequent life.