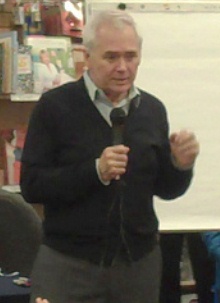 Provided by Wikipedia
Marc Tolon Brown (born November 25, 1946) is an American author and illustrator of children's books. Brown writes as well as illustrates the ''Arthur'' book series and is best known for creating that series and its numerous spin-offs. The names of his two sons, Tolon Adam and Tucker Eliot, have been hidden in all of the ''Arthur'' books except for one. He also has a daughter named Eliza, whose name appears hidden in at least two books. He is a three-time Emmy award winner; the ''Arthur'' TV series adapted from the books was named number one on PBS for three years (1997, 2000, 2001). He also served as an executive producer on the show during seasons ten through twenty-five. He currently lives in Hingham, Massachusetts.
Loading...